What are SRV (Service) Records?

An SRV record is intended to provide information on available services for systems, most commonly used with SIP configurations. SRV records have a unique system for naming: an underscore followed by the name of the service, followed by a period, an underscore, then the protocol, another dot, and then the name of the domain (automatically appended to the name field of the record).

An example would be: _http._tcp.example.com.This would be the service record for web requests for the example.com domain.

How to Configure SRV Records
1.Select Managed DNS and click on Domains 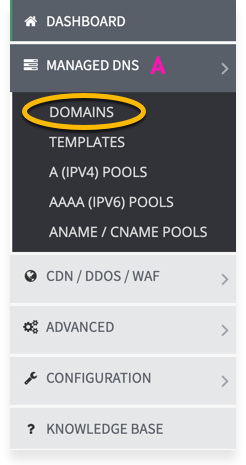 2. Select the Domain Name you want to add a SRV record too.

3. Under the SRV Records section, click the (+) to add a record.

A) Name — SRV records have a unique system for naming. The naming system is an underscore followed by the name of the service, followed by a period, an underscore, then the protocol, another dot, and then the name of the domain (automatically appended to the name field of the record). An example would be: _http._tcp.music.com. would be the service record for web requests for the music.com domain.

B) TTL — The TTL (Time to Live) in seconds is the length of time the record will cache in resolving name servers and web browsers. The longer the TTL, then remote systems will lookup the DNS record less frequently. Your name servers will also receive less query traffic since most queries are answered by resolving name servers. Conversely, the shorter the TTL the faster any changes you make to your DNS will propagate in servers that have cached data. However, your domain will receive more query traffic.

Records configured with Failover or that change often should have TTL’s set anywhere from 180 to 600 (3 to 10 minutes cache).

If a change is needed for a record with a high TTL, then the TTL can be lowered prior to making the change and then raised back up again after the changes were made.

C) Priority — The priority functions in the same way as the MX Level does in MX Records. The lower the number in the priority field, the higher the preference of the associated target. 0 is the highest priority (lowest number).

D) Weight — The weight of the record allows an administrator to distribute load to multiple targets (load balance). It is used to determine relative capacity and load between two SRV fields within the same priority, hits will be assigned proportionately by weight. This can also allow the administrators to have a powerful and weak server and share the appropriate loads between those systems. 0 is the lowest load.

E) Port — The port of the service offered.

F) Host — The system that will receive the service.

G) Notes — Add a helpful note with keywords so you can search for your records later. 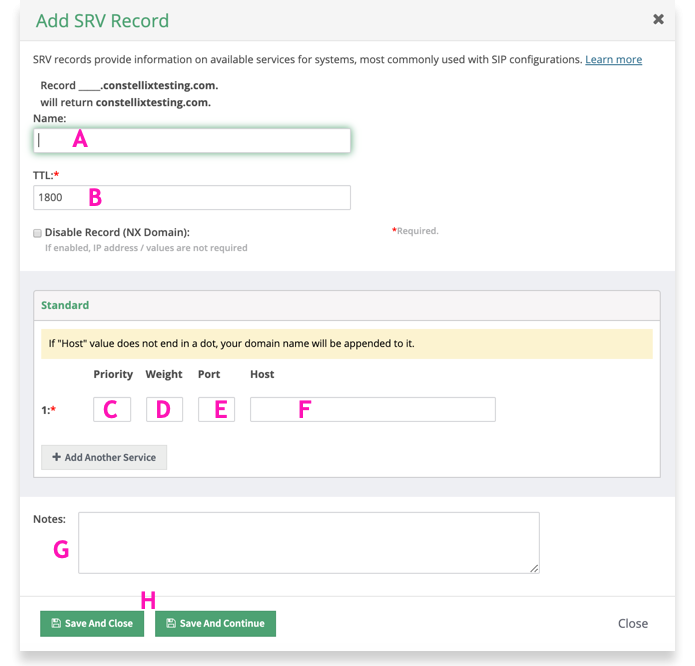